Tow trucks can often be seen rolling through the streets of West Campus, the small neighborhood adjacent to the University of Texas. But when Madison Yandell headed out to the parking lot of her condo to run errands like on any other day, she was shocked. Her car was gone from her own assigned spot.

“Knowing that I pay for that spot and that I was supposed to be parking there, and it belonged to me, and then having something like that happen is really frustrating,” said Yandell.

Data from the Texas Department of Licensing and Regulation suggests that Yandell is not alone. Their records show that of the 556 complaints filed against towing companies in Austin since 2011, 98 of them were considered “without authority- illegal tows.”

Companies or individuals with towing and booting licenses must adhere to strict rules from the Texas Administrative Code when they perform their services.  If the tow doesn’t comply with the code found in Chapter 86, the victim of the tow or the department itself can file a complaint. They will then evaluate the claim and open an investigation. It could be an offense as simple as the sign on their truck not meeting the standards, or an illegal tow—where the company tows a car without the consent of the business or residential property or without any reason for the tow. 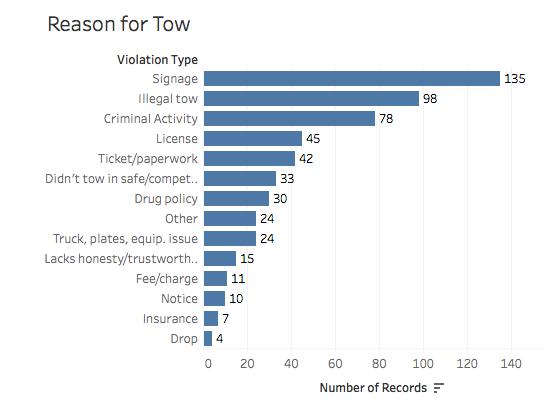 200 different companies and individuals have complaints filed against them, according to Texas Department of Licensing and Regulation, or TDLR.

J&J Towing owner Timothy Sapp defends his company, saying that they are ultimately trying to help consumers and property owners keep spots open for those who pay to park there.

“That is ultimately the root of our service, so that the people who have a legal right to park on a property have the ability to do so,” Sapp says

He says while it differs on a case-by-case basis, most business or residential properties allow the towing company to patrol the parking lots and tow at their discretion if they see a car without the proper authorization.

“The areas or properties that are more highly populated tend to opt for policies that call for patrolling by the company,” he says, “to get a higher level of service, to get more eyes on the property, and to make sure that the residents or the tenants have somewhere to park.”

J&J tows over 15,000 cars per year. Sapp says that his operation is the largest in the city and mistakes are bound to occur.

“We are dealing with humans on both sides who make errors…there’s human error with people forgetting to put their pass up and every once in a while there is human error with our driver missing a parking permit or maybe a sign getting knocked down so people didn’t have notice.”

The company has faced 61 different complaints in total—with only one of these investigations ending in disciplinary action. Some other claims include “lacks honesty/trustworthiness/integrity” and “didn’t tow in a safe, competent manner.”

The TDLR data shows only one case ending in disciplinary action being taken against J&J Towing.

Sapp says his company works with customers to mitigate the anger and frustration that comes with being towed or booted—especially if they were wrongfully towed.

“One of the reasons we are able to keep our ratio of complaints to confirmed violations so low is that we are always able to look at if our drivers made a mistake, admit our mistakes and try to work reasonable with people.”

Consumers who feel wronged filed 56 percent of the 556 total complaints against towing companies in Austin.  The rest come from inspections and TDLR itself. The most common reason for a complaint was issues with “signage,” with the “without authority- illegal tows” and “Criminal Activity” as a close second and third. Other common reasons for tow violations were issues with the ticketing, paperwork, the company’s license to operate, or the fact that they didn’t tow in a “safe, competent manner.”

Todd Forrester of TDLR says that every investigation is different, depending on the amount of solid evidence they have, as well as the location and circumstances of the tow.

The investigation could result in discipline for the accused company or individual—a penalty of as much as $8,500 or even the loss of their license. But the data only shows 30 cases of the 556 resulting in some sort of disciplinary action.

Yandell’s car was towed by Sapp’s company, J&J Towing, but she chose not to file a complaint or pursue action in court. She eventually got her money back, but she says their “mistake” cost her time, which is far more valuable.

“I really didn’t get any sort of explanation,” Yandell says. “They really put the responsibility on me and my property manager to make sure I got my car back and that I didn’t have to pay the towing fee.”

TDLR says if you feel you were wrongfully towed, there are more options than just arguing with the towing company.

You can file a complaint with TDLR, which will result in the opening of an investigation into the incident, as well as the offending company or individual responsible for the towing. You can also take the case to your local Justice of the Peace precinct and fight the tow in two different hearings.

Forrester says the key is to get as much evidence to defend yourself as you can in court or to the department.

“Get pictures of every entrance to the apartment complex, every sign at the parking facility, where you were parked and how you were parked. If you can get pictures from the scene, get them.  Bring everything you can.”

He recommends also bringing copies of any parking receipts or your parking contract to prove that the spot rightfully belonged to you.

The first hearing is known as a “probable cause” hearing, where you can get your money back in full. The second is a statutory hearing to determine if the company broke the statute—this hearing can win you one thousand dollars, plus three times the cost of the tow.

“Both hearings combined,” Forrester, says, “you can get four times the cost of towing and a thousand dollars.

He says that most people just want the money back, don’t take the extra step further to attempt both hearings, or even to file the TDLR complaint.  But the TDLR investigation can actually punish the company if the investigation finds the company at fault, which could prevent another wrongful tow for someone in the future.

You can check out the data used in this project, along with our towing company database to see which companies have complaints filed against them in the Austin, Texas area:
https://public.tableau.com/profile/avery.travis#!/vizhome/TowingDraft/WrongfulTowing.

This data comes from the Texas Department of Licensing and Regulation.  This data only considers “tow” licensees.  Some tow companies and individuals operate under the label of VSF’s, or vehicle storage facilities, which are not included in this data.